Hi-Wire Brewing will be ringing in the holidays this season with the release of two beers from their Specialty and Sour & Wild Ale program.

The much anticipated and coveted 10W-40 Imperial Stout is back! For the second year in a row, Hi-Wire Brewing will be releasing 10W-40 Imperial Stout (8% ABV), brewed with coffee, chocolate, and vanilla. With notes of dark chocolate, fresh vanilla, and roasted coffee beans, this big decadent stout is full-bodied, sweet, and creamy with a smooth finish. From Asheville’s own French Broad Chocolates, the cocoa nibs are fresh and rounded out by milk sugar and Madagascar vanilla beans. Organic Dynamite Roasting Company coffee accentuates the cocoa and adds slight roast to balance out the vanilla in this dessert beer. 10W-40 will be available in 4-packs of 16 oz cans and will see limited distribution beginning December 22nd.

The second release from Hi-Wire Brewing will be a Wild Grape Ale (7.1% ABV) brewed with Malbec Grape Must from North East Georgia. Head Brewer, Luke Holgate notes “ the grapes were naturally pressed and fermented prior to being aged in red wine barrels on grape must from a Northeast Georgia vineyard.” This mature sour blonde ale exhibits aromatic notes of Malbec grapes, red berry, and oak with a light brett character. Big barnyard phenolics meld with the tart fruity character of the base beer to make a super unique Brett forward flavor and aroma. Already a favorite among Hi-Wire’s team of brewers, the Wild Grape Ale is a special release, as it’s only available in the company’s taprooms. Packaged in a 375ml hand cork and cage bottle format, this beer will be released Saturday, December 2nd at 12pm from their South Slope Sour & Wild Ale facility | 197 Hilliard Ave. 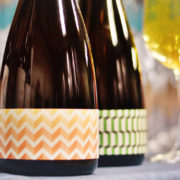 Asheville, NC – Hi-Wire Brewing will officially be rolling out its Sour & Wild Ale program Saturday, November 19, 2017 at 12:00pm at their South Slope Speciality Brewery with a bottle release of its two first sours, including a Sour Blonde Ale and Wild Rye IPA.

Over the course of the past year, Hi-Wire’s South Slope Specialty Brewery has fully transitioned from brewing a wide variety of one-time-release ales and lagers to brewing exclusively sour and wild beers. After one year of experimenting with limited releases from their Single Barrel Series and one-off batches of wild-ales, Hi-Wire Brewing is excited to announce the official release of its first two sours that will be hitting all four of the states they distribute in on Monday, November 21.

The Sour Blonde Ale (7.65% ABV) was aged in American oak red wine barrels before being bottle conditioned. It displays aromas of citrus rind and hay from brettanomyces with faint berry, pineapple, and oak. This classic American-style sour exhibits notes of bright acidic stone and tropical fruit, subtle brett funk with a clean, dry finish. Bottles will be $17.

The Wild Rye IPA (6.75%) is a lively, tropical India Pale Ale blending rye spice, dank mango, and pine notes from American hops, with the rustic character of house brett. Aged for 6 months before being bottle conditioned, this wild ale has a medium body that finishes with a soft bitterness and lasting notes of tropical fruit & funk. Bottles will be $13.

In conjunction with the release of the Sour & Wild Ale program, Hi-Wire Brewing has launched the RingMaster V.I.P. Beer Club, a year-long limited membership program that provides exclusive sour and wild ale beer releases to members. Membership is $200 and includes the following:

More information and registration is available at hiwirebrewing.com/vip

About Hi-Wire Brewing Located in Asheville, NC, Hi-Wire Brewing is known for producing approachable and balanced lagers and ales, most notably Hi-Wire Lager, Bed of Nails Brown, and Hi-Pitch IPA. They have two locations in Asheville: the 27,000 square foot Big Top Production Brewery & Taproom located half a mile from the Biltmore Estate and the South Slope Specialty Brewery & Taproom located in the South Slope region of downtown. Hi-Wire was awarded the most medals at the 2014 NC Brewer’s Cup and was named Best New North Carolina Brewery of 2013 by RateBeer. Most recently, the Zirkusfest Oktoberfest Lager won gold at the 2016 Great American Beer Festival® in the German-Style Maerzen category. Their award-winning beers can be found on draft and in bottles across North Carolina, South Carolina, Tennessee, and Georgia. 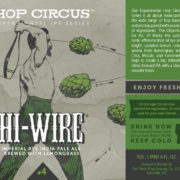 Hi-Wire Brewing’s Hop Circus Experimental IPA Series was created to push the boundaries of what has become to be expected from Hi-Wire, which is known for creating balanced and approachable ales and lagers. Each beer in this rotating series highlights a different combination of hops and malts to create one-of-a-kind IPAs. 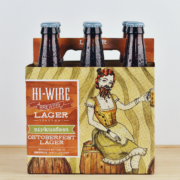 After three back-to-back months of heat and humidity, most folks are ready for cooler weather. With the fall season quickly approaching, new seasonal beers are here! Boasting full-bodied and malty flavors, Hi-Wire Brewing is excited to announce this year’s fall seasonals.

For the fourth year in a row, Hi-Wire Brewing has released its Lion Tamer Rye IPA (7% ABV). This popular seasonal is aggressively hopped with a blend of citrus-forward Citra and Amarillo hops. Ruby red in color, Lion Tamer’s citrus fruit flavors are rounded out by the unmistakable spice of bite and rye. You can find this beer in both of Hi-Wire’s taprooms, and is available in six-packs and on draught throughout their entire distribution footprint.

Also available in 6-packs and draught is the Zirkusfest Oktoberfest Lager (6% ABV). Scheduled to hit the shelves mid August, this traditional Märzen boasts all the flavors one wants in a rich Oktoberfest lager without the heavy finish. The use of Munich malt provides upfront biscuity and honey flavors that fade into a dry finish.

Finally, Hi-Wire is releasing a fall specialty beer on August 19th. Available in their taprooms and seeing limited distribution on draught and 22oz bottles is their Pumpkin Lager (6% ABV). This lager takes the traditional Vienna Lager to a new level. The malt bill in this beer attributes flavors of caramel and toasted hazelnut blended with pumpkin puree and a generous amount of fall spices (cinnamon, ginger, nutmeg, and allspice) to create a balanced malt-forward beer, perfect for cool weather. It is sure to be a fall favorite.

Whether your tastes buds lean towards a more traditional Oktoberfest, pumpkin and spices, or hops, Hi-Wire Brewing has the fall seasonal for you. So, get ready to grab your comfy sweater, stock-up your cooler, and get down on these fall favorites. They will not be around long.